Gatherings in cities around the world spread message of peace

Overseas Chinese and peace lovers rallied in various cities around the world over the weekend, calling for an end to the violence that has gripped China’s Hong Kong Special Administrative Region in recent weeks.

On Saturday, hundreds of Chinese and students in the United Kingdom gathered at London’s Trafalgar Square in protest against the so-called “independence demonstration” in Hong Kong.

One of the participants said he came to express his support for Hong Kong and Hong Kong police and his objection to separatists.

“We are not here today to protest, to act violently, but to influence them with our love and our care,” participants said.

The demonstration, with the slogan, “one nation, one China”, was organized after overseas students learned that some Hong Kong independence activists were also planning a rally, said Zhao Zhengfei, an overseas Chinese student who is one of the organizers of the rally.

“Many people here cannot see the truth we see. What they see is a purposeful message that was changed by some Western media, and they cannot see what is really happening in Hong Kong,” he said.

The demonstrations also spread to Australia, as students in Sydney, Melbourne, Brisbane and Adelaide spilled onto the streets and university campuses and called for an end to the violence in Hong Kong.

On Saturday, around 3,000 people who were mobilized through social media marched peacefully through the streets of Sydney, rallying with the slogan, “Stop Riots in Hong Kong”.

Among banners that said “Protect Hong Kong, fight against violence”, one of the group’s leaders Tony Jiang, an Australian citizen of Chinese descent, said: “We came here to stand against the violent riots and the decaying law and order in Hong Kong,” Xinhua News Agency reported.

China’s ambassador to Australia, Cheng Jingye, issued a statement on Saturday calling the Hong Kong protesters’ actions as “radical, violent and illegal” and said they were determined to undermine the “one country, two systems” principle.

“Their behaviors have grossly trampled on the rule of law and social order in Hong Kong, seriously threatened the local residents’ life and safety, and severely jeopardized Hong Kong’s prosperity and stability,” Cheng said.

He said the events in Hong Kong were “solely the internal affairs of China” and warned foreign governments to not support Hong Kong’s radical protesters or interfere.

In the German cities of Berlin, Hamburg and Cologne, peace lovers spontaneously held rallies to show their solidarity and support to Hong Kong over the weekend. Calling for peace and nonviolence, Chinese demonstrators chanted slogans such as “We love Hong Kong, We love China”.

Pan Mengqi in Beijing contributed to this story. 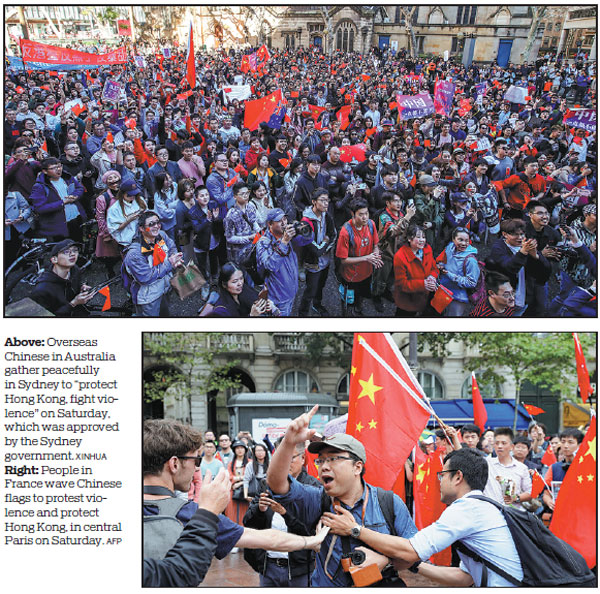 Violent protest must end: Let’s all defend the city’s rule of law